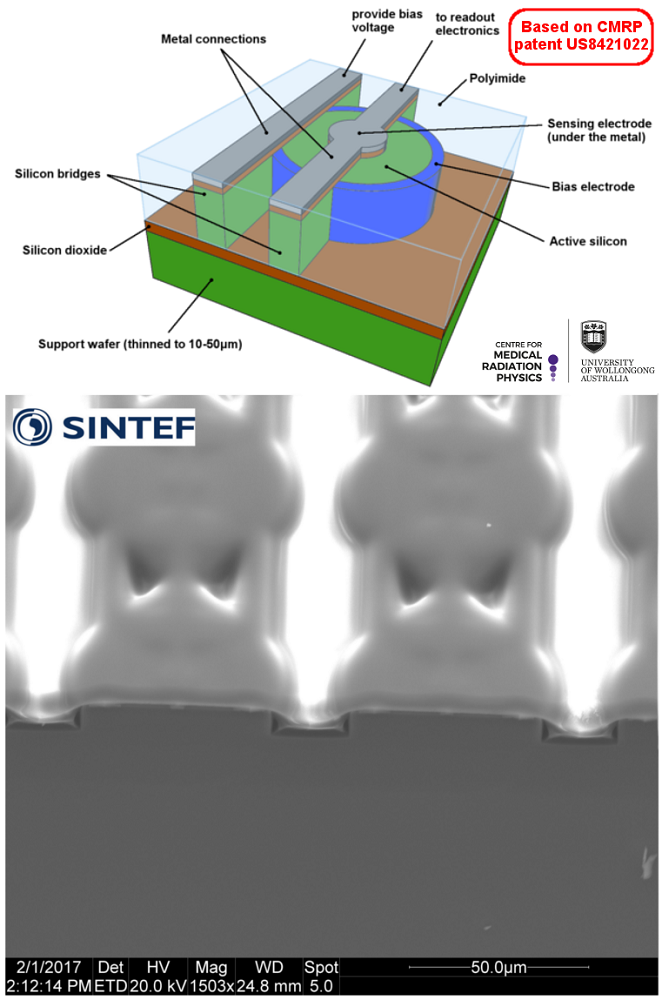 A new R&D activity has been initiated in Oct 2018 to develop a sensor for tissue-equivalent crew dosimeter based on novel 3D Si processing.
Traditional instruments for measurement of radiation dose typically aim at monitoring the radiation environment levels in relation to potential cumulative degradation effects in semiconductor electronic components. Impact of radiation to humans is in general better monitored by dedicated instruments capable of measuring end-points similar to the actual radio-biological effects in living tissues.
A variety of instruments have been developed in the past decades to achieve this goal. Tissue Equivalent Proportional Counters (TEPCs) in particular are active sensors that offer the advantage of mimicking the effects in human cells, by using low pressure gas chambers to replicate the radiation behaviour at micrometric scale, and materials that simulate the interactions in human cells.
3D Silicon fabrication technology has emerged as promising replacement of traditional planar processes for fabrication of radiation sensors, offering good detecting performance, hardness to radiation, and low-voltage operation. ESA has contributed to the development of 3D Si fabrication technologies, aiming at production of sensors for use in space radiation instruments.

In recent years, an extremely promising application of the 3D Si technology to tissue equivalent detectors has been proposed. The developments, initiated by the Centre for Medical Radiation Physics (CMRP) of Wollongong, Australia (US patent No. 8421022 B2), aim at replacing the traditional TEPC low-pressure gas systems with structures comparable in size to human cells, employing tissue-equivalent material (PMMA, polyimide…), allowing to calculate micro-dosimetry quantities and extract the Relative Biological Effectiveness (RBE) of mixed radiation fields. This technology is in its early stages and requires additional developments.

A contract for the execution of the activity has been awarded by ESA to SINTEF (NO). SINTEF’s objectives, in collaboration with CMRP, are to: